July 22, 2018 Announcements, Maryland, Politics Comments Off on Thank You

The recount is over, and we came up short by just 12 votes out of over 56,000 cast. I am unbelievably proud of the campaign we ran. We built thoughtful, progressive policy proposals that sparked conversations across the district. We discussed those plans together on 31,543 doorsteps over eight months. And we inspired 11,287 voters to take a stand for the public schools our children deserve.

While it’s tough to lose so narrowly, the truth is that candidates like me – a young, middle-class, public school teacher and immigrant son with a funny name – aren’t supposed to come this close when running in a race like this. And in the end, we have a team of outstanding advocates for transit, women and families, and civil liberties representing us in Annapolis. Congratulations to Marc, Ariana, and Sara and to fellow candidates Marc, Joe, Nuchhi, and Jordan on a great campaign.

It’s actually hard to call this a loss. As we awaited results on election night, I looked around the room and was stunned by how young the room was. Outside of friends and fellow teachers, this campaign was was powered by high-school and college students, most of whom were working their first campaign. I can guarantee that a bunch of them are going to run for office themselves someday. I just hope it’s sooner rather than later. (Standing offer: I will come knock on doors for any of you when you decide to take the plunge.)

“Mr. Paul goes to Annapolis” would have been a satisfying civics lesson for my students, but “Mr. Paul showed me how to fight for what I believe in” is a pretty good second choice. To all of those young people: please please please continue to assert yourselves in our public life. You are light years ahead of where I was at your age, and if I could make your votes count double, I would. Thank you for blessing me with the gift of your time and trust and sweat and belief. When young people learn how to take a stand, how to be part of a community, and how to fight for the future they’ll someday inherit, we all win.

For every old friend who wrote a check, for every new friend who hosted a meet-and-greet, for every young person who knocked on doors — it’s impossible to overstate the gratitude I feel in my heart right now. I have spent almost a year asking everyone I know to help me in some way or another, and it’s been amazing to see people answer the call even right up until the very end. And, of course, I am deeply grateful to my parents, who left everything and everyone they knew to come to a country where this kind of thing is even conceivable within one generation.

It was incredibly difficult to run this campaign while teaching, and I am more tired than I’ve ever been in my life, including my first year in the classroom. So I’m going to take a break for a little while and reflect on what exactly the next phase of my advocacy should look like. But Maryland STILL has a once-in-a-generation overhaul of our school funding next year; young people are STILL being gunned down in our schools and on our streets; climate change STILL hangs over us like a guillotine; immigrant families STILL struggle to survive and to see themselves reflected in public leadership; and our economy is STILL oriented toward the past rather than my students’ future. So even though I won’t be the one casting votes in the House of Delegates next session, there’s plenty of work for all of us if we want to make this place more just, inclusive, and abundant.

I don’t know where this train stops next, but I will forever be grateful for the ride we’ve been on together. 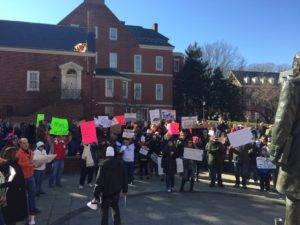